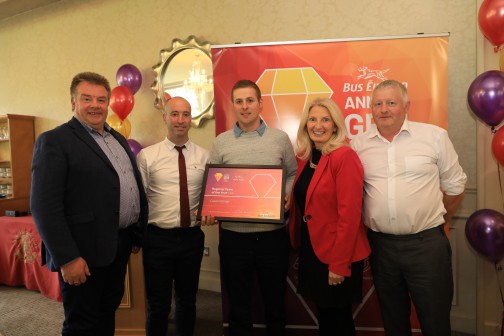 Bus Éireann’s Cavan team was celebrated, with Jim Reilly, Adrian Larkin, Sean Chapman and Patrick Gaffney recognised as Engineering Team of the Year. The team was praised for their excellent performance and collaboration throughout the year, achieving a recognised accreditation in environmental management, improving the environmental impact and working environment.

‘’I am incredibly proud of our team of committed and dedicated employees in the Eastern Region who ‘go the extra mile’ for our customers every day,” said Adrian O’Loughlin, Bus Éireann Senior Operations Manager, East. “I would especially like to recognise the Cavan Engineering team for winning Team of the Year, they exemplify Bus Éireann’s core values. Their dedication and collaboration make them worthy winners of the GEM Eastern Region Team of the Year.”

“The GEM Awards celebrate the exceptional contributions of Bus Éireann employees for our passengers, our services and for their colleagues. I want to congratulate all of those who have won and who have been nominated for GEM Awards in 2022.’’

The Bus Éireann regional awards will take place across the country in October and the winners of each region will go forward to the National GEM awards on the 8 December in Dublin.

According to a recent KPMG report, Bus Éireann employs 60 people who live in County Cavan, and transports 3,850 primary and post primary students on school transport in Cavan each school day.