Five time Olympian and World Champion race walker, Rob Heffernan today launched the Bus Éireann Route 220 (Ballincollig-City Centre-Carrigaline-Crosshaven) service in conjunction with the National Transport Authority (NTA). The service operates as part of the Transport For Ireland public transport network.
Since the enhancements to the service in January, the company has seen an increase of over 60% growth in customer journeys on the Route 220 service. 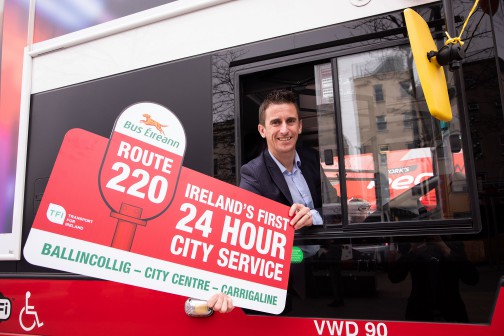 Further improvements are also planned in Cork city in 2019, including:

Key points about the Route 220 service include:

Rob Heffernan said: “I am very pleased to be working with Bus Éireann and the National Transport Authority on the promotion of their first ever 24 hour service in Cork city. As a very passionate man about my hometown, it is great to see so many people availing of the new services and I recommend anyone who hasn’t used them to check them out!”

Anne Graham, Chief Executive Officer, National Transport Authority (NTA) said: “Developing and enhancing public transport services is what the NTA is all about, and working with Bus Éireann in Cork to make these improvements to the 220, is something that we see as very important and very worthwhile.
“The response by the public to these changes has been very positive, and is a clear indication that when you provide a bus service that is innovative and that operates where and when it is needed, people will use it.”

Speaking about the improved service, Martin Walsh, Regional Operations Manager, Cork said: This major network enhancement in Cork city has been a great success and we are delighted to see such a significant increase in passenger usage”.

Over 20 new double-deck buses will be delivered to the fleet in Cork in 2019. These buses will have comfortable seating, a dedicated wheelchair space, USB sockets, complimentary Wi-Fi and CCTV security cameras.

Changes were also introduced to other Cork city routes in January including the 220X, 216, 223 and 223X. For more information, check out www.buseireann.ie or www.transportforireland.ie